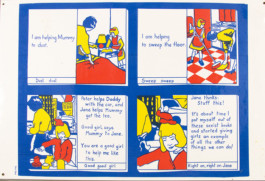 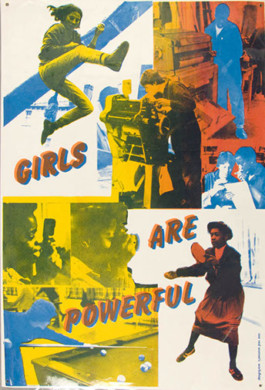 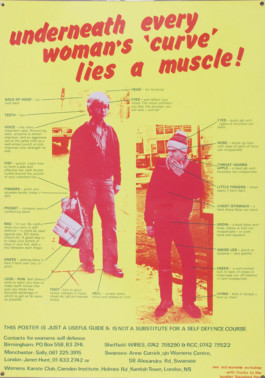 As part of the ICA's  Student Forum, Seth Pimlott interviewed Jess Baines, a member of See Red Women's Workshop. Run as a Women's collective from 1974-1990, the group arose out of a period that saw not just the extension of both political and cultural concerns, but also the rise of community activism.

My mum, a student at Leicester in the late 1960s, remembers the exact point at which she became a feminist. While her ‘socialist brothers’ discussed the ideas around the next issue of a theoretical lefty pamphlet for the student body, ‘Sublation’, she was left roneo-ing the previous one. It suddenly occurred to her, the only member who knew how to use this new print technology, that she was working for men who were dependent on her but naturally assumed that she had no part to play in the thinking: ‘What the hell were they bloody up to?’ See Red’s feminist appropriation of print was one of many similar responses of the time both to everyday misogyny and the unexpected sexism of the left. The workshop struggled through a quite difficult, but incredibly inspiring process of living the politics that they proposed in their work. It was also one part, and perhaps the exhibition misses this, of a far more widespread revolution in practice that feels truly radical: feminist collective work. From the ICA’s own series of exhibitions curated collectively by women Women’s Images of Men and About Time from 1980, to collective theatre groups, magazines like Spare Rib and Feminist Art News, to the publishing house Virago, women working together constituted a movement. I talked to Jess Baines, a member of See Red for a short period in the 1980’s and a writer and researcher into radical print shop collectives, about the politics and everyday practice of running print shops like See Red, and the peculiarities of the political moment in which they worked.

According to Baines, See Red was borne out of the burgeoning poster cultures of the late 60s, the access to new printing technology and the need for a sharp, visual argument within the women’s movement. In See Red’s 1974 statement, they argued there was the need to represent the, ‘Issues, debates and struggles that were then going on in the liberation movement’. Baines describes the dual ambition of feminist print shops like See Red to create, ‘Visual images and alternative posters that centered on women’s lives and brought those issues home, but also to live the politics through creating an alternative culture’. In this way setting up a women’s only workshop space was a deeply political action in the context of sexist and highly unionised British printing industry. In an interview with the feminist monthly Spare Rib in 1989, See Red members explain that the ‘printing world excludes women entirely.... See Red fills that gap, but its a big one. The atmosphere here is where skills can be shared and women can learn from one another'.

See Red did not see themselves as only serving the women’s movement, but also as working in a way that made manifest new ideas about what another kind of society might be that were surfacing from feminist critiques of the status quo. This meant working as a radically democratic, women only body. What did this entail? The actual process of collective work covers decision making and production - a process to do with empowerment but also challenging conventional hierarchies of power. The impetus behind it was that, ‘shared decision making, shared knowledge and labour also means shared responsibility and power'. Baines explains one example at Calvert’s Press, one of the few surviving – and thriving – collectively run print shops, where everyone was encouraged to  understand how the accounts worked. If everyone knew what was being spent on what, how money was coming in, and where the printshop was getting it wrong, ‘Then no-one could take advantage of the place'. In See Red’s practice, posters were worked on together as well, ‘The woman who has worked on an idea shows it to us and somebody else might start drawing on her design, and another person may join in. Often two or three people have drawn on a poster'.

Although the availability of cheap space was crucial to the development of the DIY movement (from the first independent record labels to poster collectives), ‘It wasn’t there on a plate. See Red’s workshop in Iliffe Yard needed lots of work done to make it habitable'. The principles of creating your own culture extended to every corner of See Red’s work; you didn’t just print, but did everything else as well. In Nicholas Saunders’ iconic DIY handbook, ‘Alternative London’, there were descriptions of how to, ‘Make your own yoghurt, and where to practice different kinds of worship but also how to do your own wiring, plumbing — and your own printing'. For women this had a different dimension. To look after everything yourself was to overcome all the acculturated, practical restrictions, on what you were told you could, or could not do. Baines recalls how exciting it was to come into an environment in which people tackled the practical problems around them themselves ,’You start to think your life doesn’t have to be restricted to the right here and now, perhaps you can live a different life to the one that seems to be on offer'.

On the one hand making physical things in a print shop made collective work possible, even efficient - especially in comparison to social movement groups. The cycle of production, getting posters out and paying for the paper bill had its own positive pressures, ‘You couldn’t spend too long navel gazing about how the collective was or wasn’t working... because stuff needed to be done'. On the other hand the resistance of producing something physical, the costs, the amount of willpower and determination it took to get something printed, meant that you couldn’t lazily put out anything you wanted - it had to be of value. To make a physical thing was an incredibly considered process because it was such an exhausting and expensive one.The collective design process was strenuous. At See Red everyone talked over a design, reworked it, made sure that the images were speaking to as many women as possible. What came with this effort was the feeling you were affecting, in whatever small way, the material world outside, particularly as you put the posters up, ‘There is an extension of your politics into something tangible, and material, that seem to be meaningful'. Although it was a marginal activity, producing ephemeral posters that were meant do their work in communal kitchens, campaigning and advice centres or conferences, the idea was not just to speak to the converted, but to court or antagonise a wider public as well. See Red and poster print shops like it were underground but had ambitions to influence the mainstream - now in a period where ‘Doing it yourself’ is so much easier, nevertheless that desire to cajole and communicate with an audience beyond the confines of your immediate social group feels as if it has dissolved.

Although there were some consistent themes in See Red posters, and some posters that remained in print for over a decade, many were produced to intervene in a particular argument. The enduring themes were ones that came out of consciousness-raising groups - for instance women’s dual role in work and home and the nature of domestic labour. The posters provide a map of the evolving feminist preoccupations of the period: early posters were directed at ‘socialist brothers’, then there were solidarity posters with women’s struggle nationally (for instance the Grunwick strike - a photographic processing plant in Willesden, an groundbreaking struggle for Asian women and equal pay) and globally, posters on sexuality, posters made by and for black women. They are also brilliantly funny. One poster has an image of a curb crawling, sleazy looking guy, next to another of an elderly woman, that describes which parts of her body she might use to fight back and inflict pain on the most sensitive parts of his. But See Red also came to see problems in the way they did their work. In Printing Is Easy? a 1986 catalogue of radical print-shops, See Red say that by changing a few choice words to their poster, ‘Capitalism depends on domestic labour’, it could describe the way that they were, ‘servicing’ the women’s movement.

See Red had an economic pattern that was similar to many other radical printshops. It worked for eight years without grants, before getting Greater London Council awards between 1983 to 1986. Both financial routes had their own problems for such projects. With commercial work there was the sense that you might become a little factory, and work on projects you didn’t approve of. Waiting on grants meant you surrendered some autonomy, and Jess Baines describes an attitude that sometimes developed in organisations across the sector that you couldn’t work without grants, ‘Whereas people had been doing stuff for years without one'. However both options meant employment for printers, as members of See Red write in Printing is Easy, ‘Funding wages meant real job opportunities for women who could not afford to work for nothing and would not normally have the chance to learn screen printing; women with no printing skills, working class women, black women, lesbians’. It also provided new equipment that improved the quality of the posters, ‘we can now use the fancy techniques of advertising and straight political campaigning groups to our own advantage, so that the finished poster is comparable in quality and can compare with the media’s printed matter and is much nicer'. Whatever the ambivalence over support from local councils, following the abolition of the GLC by the conservative government in 1986, See Red felt that this kind of finance was vital, ‘Bring back the GLC!'. A commentator observed how weird the politics were, ‘It was an extraordinary period in the 80s when you had a Thatcher government busy trying to dismantle the whole post-war settlement, and then you had municipal councils, this thorn in her side, who were busy giving money away to groups trying undermine Thatcherism'.

To look through the work of See Red is to touch upon an affecting visual polemic on oppression and power, the images and slogans are still potent and relevant. What is less apparent, but a real strength, is the urge to imagine another kind of community within society - and then try and make it. To look at the posters, read around See Red and talk to Jess Baines is to see a revolutionary moment where women attempted to self-construct a world while surrounded by a hostile environment, trying to live a new kind of life and produce significant work out of it. The strenuous process of collective work is evident in the original and fierce images that were produced by See Red. Jess Baines said, ‘If you want to create a world where work is empowering, where it’s not somewhere that you’re exploited or alienated, where you learn and feel like you’re doing something worthwhile, contributing is to make the world a better place, well then you bloody well better do it in a way that reflects those values'.

The brilliant website charting the history of poster collectives and radical printshops from the late 1960’s on, administered by Jess Baines, can be seen and contributed to at radicalprintshops.org.

For a more detailed discussion of feminist printshops and their context see The Cultural Policy Journal.