Chandigarh
Images of the Future 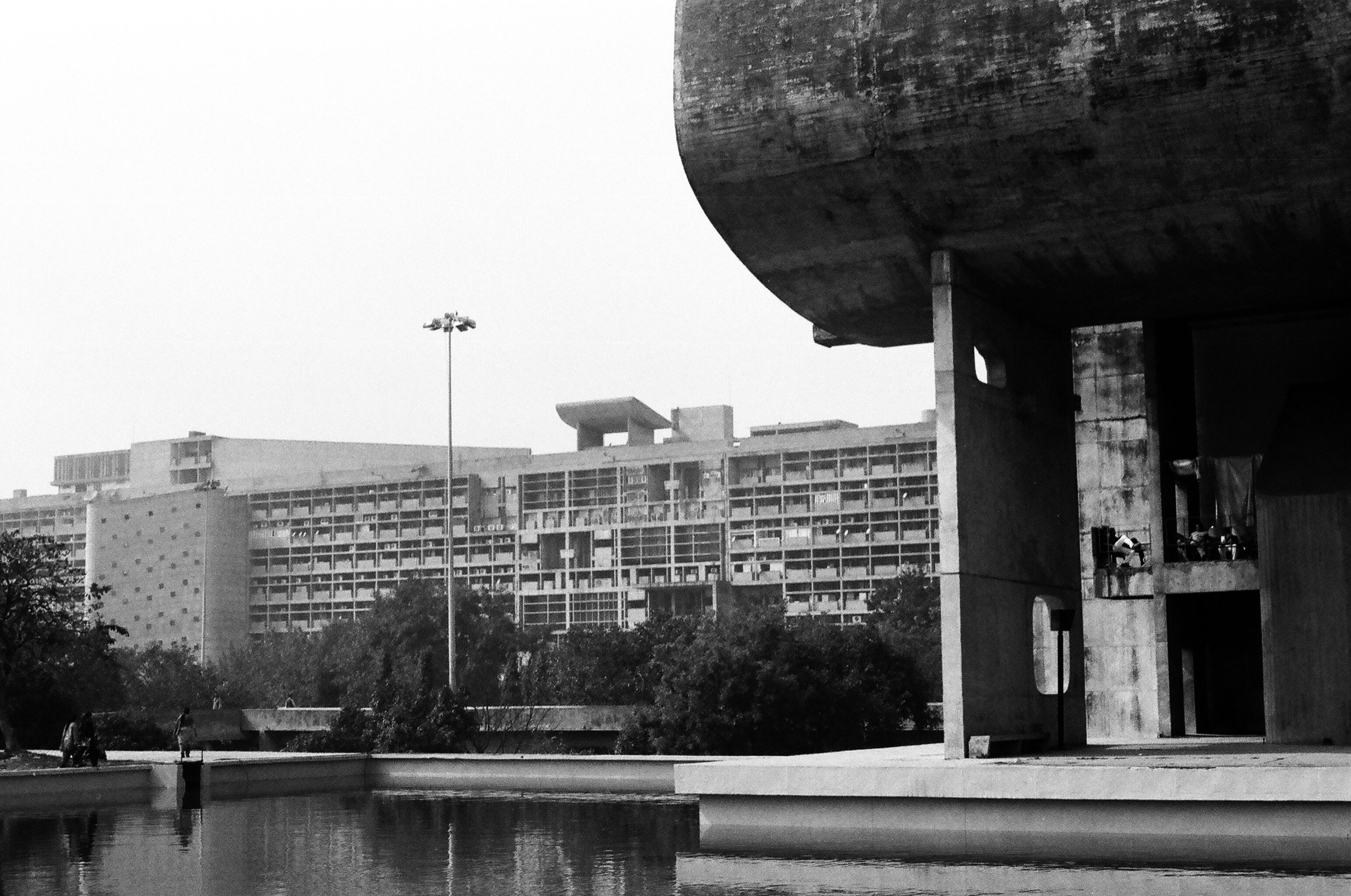 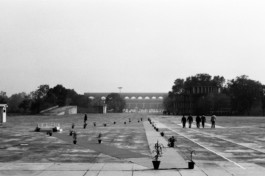 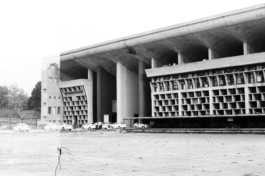 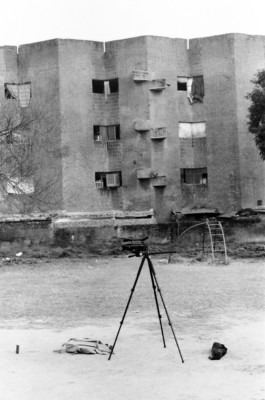 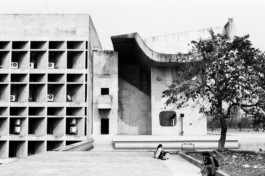 Chandigarh, the capital city of Indian Punjab, was conceived after the crisis of Indian partition in 1947, where half a million people were murdered and over 15 million displaced. Chandigarh, begun in 1956, was part practical solution, created to replace the grandeur of Lahore, lost to Pakistan. But it was also an attempt to shape the future of India with an idea. Chandigarh – the first planned city in India following independence - was intended to provide a symbolic focal point for a modernising and secular India. It was intended as a radical rupture with the past; a promise of modernity not soiled by India’s colonial inheritance.

Chandigarh had two driving actors. ForJawaharlal Nehru, the first Prime Minister of an independent India, Chandigarh was to be a bold statement of the country’s future as a forward looking sovereign state, capable of providing basic welfare to all those recently remade as Indian. For the architect Le Corbusier who was tasked with developing the master plan and designing the Capitol Complex (the buildings of state) it was a tabula rasa, both in a spatial and political sense. The new city was to be built in a vast empty plain at the foothills of the Himalayas. But Nehru’s vision gave Corbusier the opportunity to construct more than a ‘machine for living’: it was a machine for a polity. The brief fitted his megalomania.

At the city’s head lie the four extraordinary buildings of the Capitol Complex, Corbusier’s masterwork. Photographs of these buildings, captured at the time of their completion in the late 1950s and early 1960s, have become iconic. Striking and deeply seductive, they describe the pristine, rational realisation of modernism in architecture on the grandest scale. The buildings appear all the more powerful because they are sculptural and sinuous, not simply industrial and mechanical. Collected in Corbusier’s Complete Works, these photos are an enduring image of an imagined Chandigarh, not for the people that live there now, but for informed spectators of architecture. The city’s remoteness - five hours drive from Delhi and halfway across the world from the centre of European modernism – increases the sense of exotic otherness.

I went to Chandigarh to make a film about the mess that history had imposed over these images. I had read about the urban sprawl that now spreads over the once bucolic plains between the Capitol and the Himalayas, the overgrown weeds and old cars occupying the massive esplanade that separates the buildings of state, and the physical traces of political upheaval, Sikh terrorism, population growth and material degradation. I wanted to capture the evidence of all of this, and ask how Nehru and Corbusier’s monumental vision had played out.

My method would be to recreate Corbusier’s ‘architectural promenade’. The promenade is a central idea in his work whereby an orchestrated complex of buildings can draw the subject though a kind of initiatory route, enabling inert sites and cunningly placed buildings to come to life through an almost sacred procession. In Vers Un Architecture Corbusier cites the architectural historian August Choisy’s description of the Acropolis as a series of carefully constructed perspectives that individually leave an ‘image impression,’ and in sequence achieve a kind of ‘architectural montage.’ (Eisenstein, writing about Choisy, describes the Acropolis as the first ‘ancient film’).

By following the routes prescribed by Corbusier, mapping the current reality onto his utopian blueprint - my film as a counterpoint to Corbusier’s ‘film’ - I thought I might capture the contingencies of Chandigarh now. This palimpsest might reflect on how Corbusier and Nehru’s idea of the city has stood up to time, and could describe the movement between then and now. But what I found exceeded my expectations.

The Capitol was Corbusier’s crowning achievement. It comprises the three arms of an ideal democracy - a High Court, an Administrative Secretariat, and a parliamentary Assembly - situated over a vast concrete plain.

The contemporary reception of Corbusier’s work matched the messianic task he had set himself. The hyperbolic praise of one admiring architectural critic who visited it in 1960 is typical: Paul Rudolph commented that ‘the relation of the buildings to the site ... is unsurpassed anywhere and at any time. You think you are on the face of the moon. It is the only grouping of the 20th century that makes any sense whatsoever, undoubtedly the century’s greatest.’

60 years later, access to the site is impeded by security checks. In 1994, at the height of the Sikh terrorist campaign, the First Minister of Punjab was blown up in his car outside the secretariat. Although there is no real threat any more and the security presence illusory, a ring of barbed wire and military checkpoints prevent public access to the buildings. This place was originally quite cut off from the residents of Chandigarh, but now it is almost impossible to access. You can see the sculptural peaks of each building from the outside road, and this is the only way most people encounter them. It is important to remember that the people who are uninvited don’t necessarily feel left out. The capitol means little to the people of Chandigarh: if anything it represents the home of corrupt officials and politicians. One architect told me that three quarters of the population have never even visited the sector.

I had wanted to take stills from the same angles as those presented in Corbusier’s Complete Works, and reconstruct his filmic promenade. Once I was within the complex, I realised that almost nothing, superficially, had changed.  Although his promenades were overgrown and forgotten - usurped by newly trodden paths - the images of the buildings could be easily replicated. It seemed as though my images spoke of little other than the agenda of the person directing their composition – Corbusier.

Despite a tumultuous half century, the particular perspective of these images remains intact. You see what Corbusier wanted you to see. One instance of this is the Assembly. The Assembly appears almost exactly as it did in 1966; a proud building of parliament, assured of its power to instil decent democratic values in the politicians that govern Punjab and Haryana. Yet at the same time, this idea is absurd. Following decades of corruption, the total annual session of the Assembly has been limited to twenty days each year, in order to prevent a platform for the opposition.

The Assembly is purely ceremonial, and Corbusier’s ornately painted front door has not been opened in years. The orchestrated effect of a neat architectural image has had no influence on the way the spaces are used or its politics. It has become, says Sunil Khilnani, ‘a glorious stage set where tableaux of state might be enacted, but lacking everyday politics.’ People and politics have no real impact on the buildings, and the buildings have no real impact on them.
Indeed, once you are allowed into the complex, it is not the modernising vision that remains, but something more perturbing, which Corbusier had perhaps secreted in his plan. Really, these buildings are monumental sculpture. Their most visceral impact comes with a jolt of terror, one they share with the encounter of certain ancient ruins, because Corbusier had intended these buildings to speak through time, anticipating their ruin. His architecture/sculpture was intentionally built to be stumbled upon long after they are unpeopled and their practical function obsolete. They inspire awe in their scale, but also because of their mysterious origins. Corbusier saw his role in the Capitol as an artist-prophet. His pharaonic conception of the Capitol is revealed in a throwaway remark in a contemporary sketchbook: working in India had shown him ‘the advantages of slavery in high and noble works of architecture.’ By effacing the labour involved in its creation and obscuring the human purposes of the architecture, Corbusier was attempting to deify his role.

Chandigarh is remarkable in India because it is orderly and has utilities. South of the Capitol, the city is made up of 69 discreet neighbourhood ‘Sectors’, separated by arterial roads. Each sector was planned to be a self-sufficient community with healthcare, schooling, and amenities for 20,000 people. Talking to urbanists and citizens in Chandigarh, they describe the success of the neighbourhood and its fantastic public infrastructure. Yet an aspect of the original master-plan that has remained intact is the built distinction between ‘elite’ and ‘servant’ sectors. Chandigarh was designed to be a professional and administrative capital, with no industry. The functionaries of government and business were afforded privileges – and the closer you are to the Capitol complex the larger your housing plot. Over time these elite sectors (1 to 8) have been treated better (getting reliable water, power and better road surfaces) than the sectors beneath. Corbusier’s design and India’s social divisions fit well.

Beyond the planned Chandigarh, slums have sprung up in the spaces leftover in the rigid grid, such as street corners, park edges and undeveloped plots of land. There was no countenance for the very poorest in the original plan. By moving the camera through promenades through the city, I attempted to pick up on this gradation of social and economic status.

What has ended up as an unexpected and interesting part of the film was not the one that described the movement between then and now, but the new image of the future. New Chandigarh, a completely new city in construction on the edge of ‘old’ Chandigarh, is an entirely commercial venture. A political game plan, the land it is built on was brought privately by politicians, then sold to the government for development at ten times the price. Ruchika Ghanna, a journalist who has fought such corrupt developments, said: ‘The politicians sell the land to the government, the government to the developers, the developers to an elite and at every level it is the common man who has to pay the price of all this corruption.’

An inadvertently unsettling portrait of this new city already exists in the promotional videos of the developer Omaxe (https://www.youtube.com/watch?v=TlrYqxICxKk). A glib and oily voice describes a new fantasy, which like Chandigarh itself, proposes a radical break with the past. However, in place of any social ambition (even a flawed one) is the drive for profit. The only purpose of the centerpiece of the new city, the Omaxe Centre, is to satiate the taste of the total individual who lives to shop/eat/exercise/repeat, all within the ‘spatial environs of 360 degree world class international business hub.’ There is no society in this building, but it is supposed to be everything you need. New Chandigarh could be anywhere. Marketing itself as ‘a little Singapore in India,’ the master-plan had indeed been drawn up by a company from Singapore. And, like Singapore, the sterility and cleanliness here implies that any form of dissent would show up on its shiny surfaces. In New Chandigarh, poverty would show up straight away.

With my film I had wanted to see history at work on a city that sought to efface, even re-write, the history of India. Chandigarh was an attempt to re-imagine society, but I hope that the film shows how New Chandigarh is indicative of the current and more insidious mode of shaping the citizen through the built environment.

Although I am ambivalent about Corbusier’s motives behind Chandigarh, there is a lot to admire about the City and the Capitol. For one commentator I spoke to, Chandigarh had been a ‘necessary mistake’ in the nascent stage of Indian democracy.  Yet the future of Indian cities is neither the orderly infrastructure and planning of Chandigarh, nor elite developments like New Chandigarh. In the next fifty years, it is estimated that 300 million people will move into Indian cities. It is the informal, unintended slums of Chandigarh (where the real politics of the city already take place) that provide the model of future cities. How Indian democracy responds to this growth, is the great challenge.

You can see parts of my film here